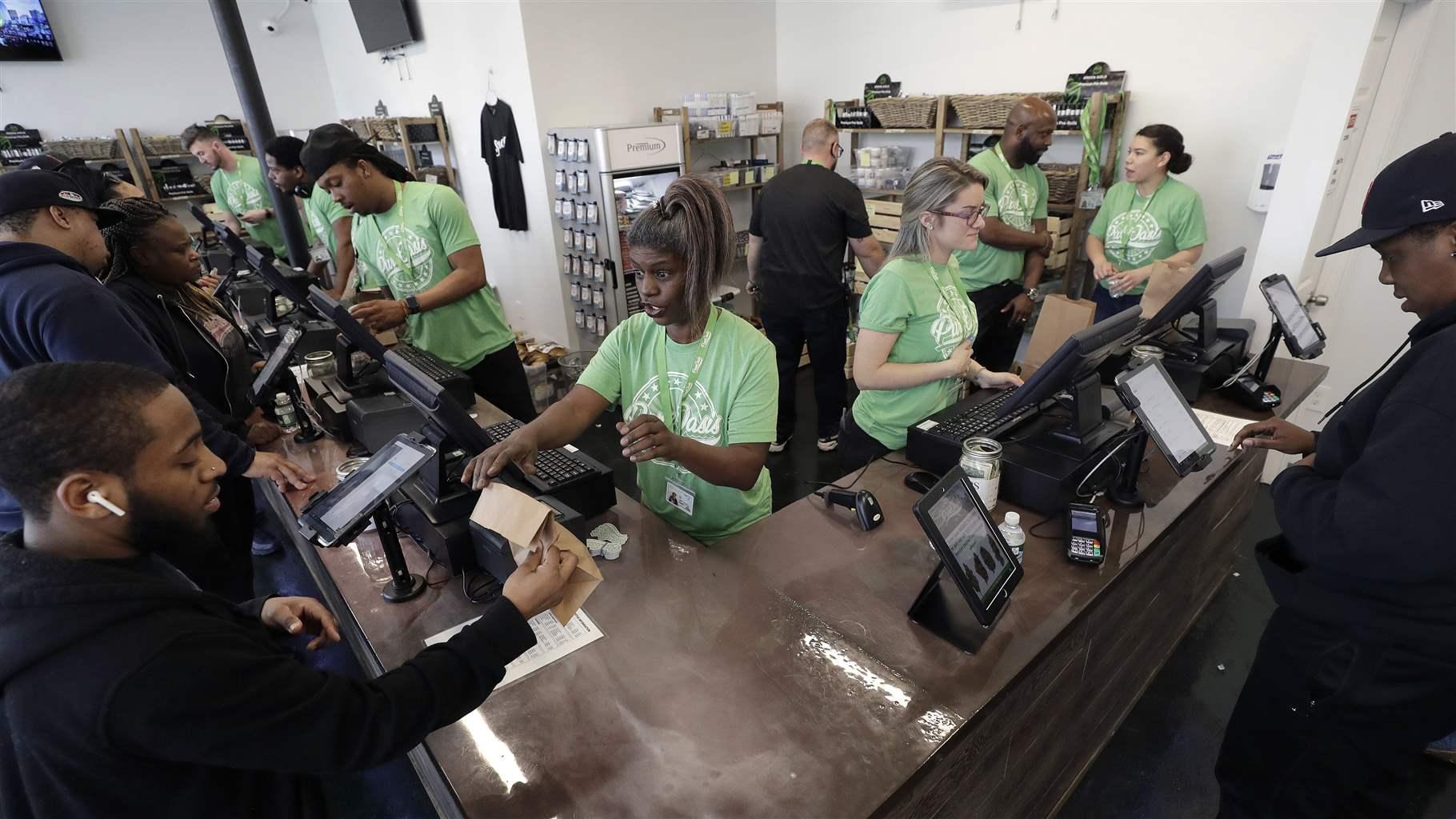 Los Angeles has set aside effectively all its new marijuana dispensary licenses for people like Ryan Brown.

He’s Black. He’s from a poor neighborhood. And he’s gone to prison for selling pot.

But Brown, 47, didn’t get past the first stage of applying for one of the city’s 100 first-come, first-served retail store licenses. He’s frustrated by reports that some applicants who were wealthy or lived in gentrifying ZIP codes such as East Hollywood.

“We don’t have one successful social equity [licensing] program yet,” said Bonita Money, founder and executive director of the National Diversity & Inclusion Cannabis Alliance, a Los Angeles-based nonprofit that advises and advocates for social equity entrepreneurs.

Social equity provisions were central to Illinois’ 2019 law legalizing recreational pot sales. They’re key to ongoing legalization debates in New York and New Jersey. And they’re increasingly common in legalization ballot measures, such as those approved in Arizona and Michigan.

But the systems aren’t working as expected. Programs in Los Angeles and around the country have been plagued by delays, lawsuits, computer glitches and corruption allegations. Despite policymakers’ best efforts, some potential licensees have struggled to access the money and expertise they need to get licensed and launch a business.

Money, of Los Angeles’ cannabis alliance, reviewed the list of applicants Los Angeles regulators initially approved for the first 100 retail store licenses, and estimated that only 11 Black people made the cut. The city Department of Cannabis Regulation declined Stateline’s requests for data on licensees and to make department head Cat Packer available for an interview.

“A lot of times we’re people who grew up basically on the streets. A lot of us don’t have college educations. We’re not contract-savvy, we don’t have a team of lawyers.”

In Massachusetts, only 27 of the 122 applicants initially given “economic empowerment priority” by regulators in 2018 ended up applying for licenses, Politico reported last year, and only eight received them. The state Cannabis Control Commission did not respond to requests for updated numbers or comment by publication time.

“Some things work, and some things don’t work,” Herod said. “So we’re going to continue to iterate, until we have parity in the marketplace.”

In Los Angeles, meanwhile, regulators haven’t yet given final approval to any social equity licensees though it’s been more than three years since the city created rules for legal cannabis businesses.

Brown says people he knows are souring on the program. “Most people have given up,” he said. “Their attitude was, ‘I knew it was too good to be true.’”

A Flood of Litigation

States and cities with social equity programs also often limit the overall number of licenses or licenses in certain neighborhoods. That creates a feeding frenzy over licenses in hot markets and puts pressure on regulators to ensure licensees have spotless qualifications.

The Los Angeles City Council, for instance, initially capped pot shop licenses at 1 per 10,000 residents, or about 400 citywide, and banned pot shops within 700 feet of schools, parks and other dispensaries. Regulators awarded 184 licenses to existing medical marijuana dispensaries that had been operating in a legal gray area.

“Social equity is now the only vehicle in the City of Los Angeles—outside of [mergers and acquisitions] with those original dispensaries—to get a dispensary,” she said.

The Los Angeles City Council, for instance, in 2017 defined a “Tier 1” social equity applicant as someone who earned up to 80% of the city’s median income and either had a cannabis offense on their record or had lived for at least five years in an area the city considered disproportionately impacted by the war on drugs. People who had lived in such an area for 10 years could qualify as “Tier 2” applicants.

The program ran into problems almost immediately. A technical glitch that allowed some candidates to submit their retail store applications early led to lawsuits from rejected applicants and a citywide audit, which paused retail store licensing for months.

Money and other advocates for minority entrepreneurs accused the city of licensing applicants who weren’t really low-income. And it turned out some licensees had unwittingly signed predatory contracts with investors, which shut them out of majority ownership of their business or made them vulnerable to a buyout.

In response, the city council last summer tightened income and residency criteria and required applicants to own a majority equity share in their proposed business.

But the council also created a new problem, when it announced a plan to award cannabis delivery licenses exclusively to social equity applicants until 2025. Established cannabis companies opposed the move.

“They changed the law and prevented a very large portion of us from getting a license for another five years, which is just untenable,” Zachary Pitts, CEO of delivery service Ganja Goddess Delivers and a plaintiff in a lawsuit against the city, told Cannabis Business Times. “There’s no way that we can survive.”

City leaders have also added 100 new retail store licenses for social equity candidates, which won’t be subject to the city cap, Bricken said. She estimated that about 534 retailers will be licensed in the city overall.

The rollout of Illinois’ social equity program has been similarly messy. Last year regulators received more than 2,500 applications for the first 75 dispensary licenses available. Applicants who met certain social equity criteria (such as businesses owned by someone convicted of a marijuana-related crime) got extra points on their applications and could qualify for grants and technical assistance.

Potential licensees said that the state hadn’t let them amend rejected applications and criticized its scoring process. Some sued, alleging regulators were favoring politically connected companies. Meanwhile, even some successful applicants sued over state efforts to give rejected applicants a second chance.

State lawmakers reportedly are now considering doubling the number of available licenses and tweaking licensing criteria to make it easier for low-income, minority and formerly arrested or incarcerated entrepreneurs to qualify, the Chicago Tribune reported.

In Colorado, some existing cannabis business owners are critical of proposed social equity programs in Denver and Aurora.

Amy Sharp, CEO and founder of a Colorado-based cannabis courier service, was ready to fight the Aurora City Council’s decision to give delivery licenses only to social equity companies for three years. She changed her mind when she realized her company could qualify as a social equity business. (She declined to explain how.)

Sharp predicted that both cities will face litigation. “It’s definitely not constitutional, what they’re doing,” she said.

Vanderbilt Law School professor Robert Mikos, who specializes in cannabis law, said it shouldn’t be hard for cities and states to defend their licensing policies so long as they don’t explicitly favor applicants based on their race.

For instance, an Ohio county judge in 2018 struck down a law that would have set aside 15% of medical marijuana licenses for Black, Native American, Hispanic and Asian people.

“It used an explicit race-based classification system,” Mikos said of the Ohio law. “And that’s about as difficult a thing to defend under the equal protection clause and the case law—that’s about as hard to defend as anything.”

The Cost of Doing Business

Cannabis businesses are uniquely expensive and difficult to operate. They must navigate a thicket of state and federal regulations, from installing special ventilation systems to following certain security protocols. Compliance can require hiring experts. And because selling marijuana is illegal under federal law, it’s nearly impossible to get a business loan.

Laura Herrera, a cannabis consultant who advises social equity entrepreneurs in Oakland, said the application process in the city is akin to getting planning permission for a housing development. And that’s just the beginning, she said.

“Nobody’s really prepared, except for big firms, for the bureaucracy and then the compliance requirements, and all the operational requirements,” she said. “It’s a huge lift.”

While Brown told Stateline he thought it would cost about $100,000 to rent and renovate a cannabis store space in Los Angeles, industry experts said the cost would likely be much, much higher.

To establish a dispensary in an industrial neighborhood in Los Angeles within a year would likely cost $1 million, Bricken said. “That’s cheap.” She said starting a dispensary in a neighboring city like West Hollywood could cost twice as much.

Starting a delivery business costs less but can still mean tens of thousands of dollars in licensing fees, application fees and upfront investment, depending on the jurisdiction, industry experts say.

Applicants also need a strong team, Herrera said. She gave the example of a mom who lives in public housing and has never run a business before. “They need an incubator, or a partner, because they’re not businesspeople,” she said.

States such as Colorado and cities such as Oakland and Los Angeles have created incentives for established marijuana businesses to give social equity applicants capital, rent-free space or help with compliance as they grow their businesses.

But those programs can create new problems, as some entities partnering with social equity applicants don’t have good intentions—such as the predatory investors in Los Angeles.

Take Oklahoma’s medical marijuana program. “It’s unlimited licenses, very low barriers to entry and very affordable licenses,” Todd said. Well-financed, wealthy entrepreneurs will still have an advantage in the market, she said, but at least lower-income entrepreneurs can get a foot in the door.

“It’s been very stressful, because I mean, every morning I wake up and check my email and hope to get the email saying hey, let’s go to the next step,” he said. “I’m pretty much sitting here waiting and hoping.”