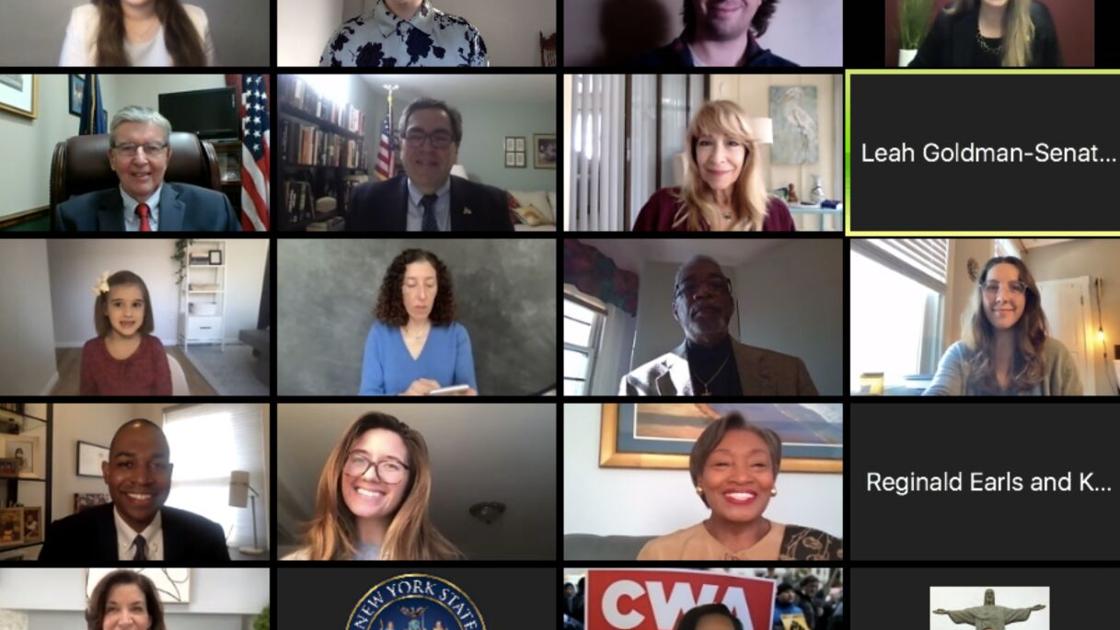 Sen. Michelle Hinchey, D-46, hit the ground running the first two weeks of session and is ready to focus on closing the state’s $15 billion gap in upcoming budget negotiations, including a tax on New York millionaires and billionaires, legalizing recreational marijuana and other revenue raisers, she said after a virtual swearing-in ceremony Saturday.

More than a dozen top national and state Democratic leaders, colleagues and staff joined Hinchey for a swearing-in on a Zoom call Saturday afternoon because of the COVID-19 pandemic. The freshman senator swore her Oath of Office in Albany in late December to represent the 46th Senate District, which includes all of Greene and Montgomery counties, and portions of Schenectady, Albany and Ulster counties.

Hinchey, of Saugerties, made her political debut in November, flipping the district blue for the first time since 2014.

“The start of session has been very busy, but busy is good,” Hinchey said Saturday. “If you’re busy, you’re doing it right.”

Hinchey is in favor of raising taxes on state millionaires and billionaires, legalizing recreational marijuana and other creative measures to assist the state’s historically high $15 billion deficit because of the coronavirus pandemic.

The senator does not support a tax hike on the middle class.

“Our working families, our middle class and our first responders, our hospitals and our schools should not be bearing the brunt of the crisis they did nothing to create,” she said. “I do support an incremental tax increase on the ultra-wealthy and those who have made additional billions of dollars during this crisis while the rest of us are struggling to put food on the table. Those people really need to step up right now and support the community.”

The state needs federal assistance, Hinchey said, but must do its part to close the budget gap.

“I believe that we can’t run on an austerity budget here in the state,” she said.

The freshman senator supports the proposal to legalize recreational marijuana and the potential accompanying avenues to create small businesses.

“It will help as a revenue generator and the long-term economic opportunities it poses,” Hinchey said, adding legalization will open the door for industrialized hemp and other opportunities for agriculture.

“Many of our surrounding states have legalized it; we are losing revenue to them by the day,” she said. “So if we can do it the right way to support our communities and support the revenues in it, that is something we’re looking at.”

Since session began Jan. 6, Hinchey voted in favor of bills to make it easier for New Yorkers to vote — including greater access to using absentee ballots and an absentee ballot tracking system — and the COVID-19 Emergency Protect Our Small Business Act to protect restaurants from third-party delivery fees, freezing unemployment insurance rates, establishing a partial-unemployment system and a small business eviction and foreclosure moratorium through May 1.

Hinchey is ready to focus on the issues that have burdened upstate rural communities for years, including replacing crumbling infrastructure, increasing access to high-speed and affordable broadband internet access, improving public transportation and housing, support for small businesses, revitalization of community Main Streets, establishing good-paying, diversified career opportunities to encourage families to build lives upstate, building a clean energy economy, among others, she said during her virtual swearing in Saturday afternoon.

“As we’re surrounded by disinformation, confusion and exhaustion, it often seems like it can’t get any worse,” Hinchey said. “This moment depends on us. It has never been more important to stand up for our values, stand up for our neighbors. That is why as your state senator, I am committed to prioritizing all.”

U.S. Sen. Majority Leader Chuck Schumer served in Congress and the state Assembly with Hinchey’s late father Maurice Hinchey, who served in the state’s 22nd and 26th Congressional Districts and the 101st Assembly District for two decades each.

Schumer expressed his love for the late Hinchey, who he used to call “Mighty Mo,” at the start of Sen. Hinchey’s virtual ceremony Saturday.

“And you are going to be Mighty Michelle!” Schumer said to the new senator. “[Today] … what I think most of is Mighty Mo looking down on this ceremony and smiling. What a legacy. It’s a great day for the Hudson Valley, Capital Region and your district.

“It’s a diverse and beautiful district and they need good representation. Frankly, they didn’t get it the last few years in the Senate, and now they will.”

Hinchey is filled with humility and is a good listener, Sen. Neil Breslin, D-44, said before swearing the senator in.

“That’s a very difficult combination for an elected official to have,” he said. “Michelle Hinchey represents what I think the best of all senators will be.”

Schumer recalled the parallels of Jan. 6 as the results of the special Georgia Senate runoff elections were announced in the early-morning hours, revealing he would be majority leader, followed by the fear that afternoon as he was quickly led to safety by a Capitol police officer after thousands of demonstrators attempted a violent siege of the U.S. Capitol.

“There are some people listening to this Zoom who didn’t vote for you, who may be of the other party, but you won and you’re state senator for everybody,” Schumer said. “That’s the beauty of the United States and this what we’re doing here today is the United States — not that band of goons, of insurrections of white supremacists, of bigots.

Schumer raised his hands in virtual celebration with Senate Majority Leader Andrea Stewart-Cousins about their shared “majority leader” title at the national and state levels.

Stewart-Cousins, D-Yonkers, who helped recruit the new senator to run, said the 46th District, which was created during the state’s last redistricting process in 2011, was not created for a candidate like Hinchey.

“You could have done a lot of things, but you decided to do this and this is the right time for someone like you.”

Hinchey is one of seven Democrats in the 2021 Senate freshman class. The Democratic majority conference gained a veto-proof supermajority with 43 of the chamber’s 63 seats for the first time after the November elections.

Lt. Gov. Kathy Hochul was one of the first to speak at Saturday’s virtual ceremony, calling Hinchey “a powerhouse in her own right.”

The lieutenant governor praised 46th District constituents for voting to elect Hinchey in a traditionally red district, recalling her own 2011 victory to represent the Republican stronghold 26th Congressional District in Western New York.

U.S. Rep. Antonio Delgado, D-19, which includes all of Greene, Ulster and Montgomery counties within the 46th District, is thrilled to see Hinchey take the reins as a public servant, he said before she was sworn in, remarking on her genuine compassion and strong intellect.

“We’ve been struggling with this dynamic and the imbalance has grown grotesque for a good while now in the interest of ‘self’ and ‘I’ as opposed to ‘we’ in the public good,” Delgado said. “…Isn’t it poetic in the midst of all this history-making time, a leader emerges. Someone who has the capacity, the heart, the drive, the DNA has been spoken about, who learned the art of public service at the feet of greatness and who has become, in her own right, become an individual who knows what it means to care for people. All people.

“Whoever drew this district didn’t see Michelle coming — it wasn’t drawn for someone like Michelle.”

Hinchey can unite people throughout the diverse district and nation, Delgado said.

Hinchey was humbled by the outpouring of love, support and encouragement she said, adding her parents, Maurice and Ilene, provided a strong foundation for work in the public sector. Growing up, Hinchey said watching her father help constituents with various issues gave her an understanding about how government is intended to function.

“Government is supposed to work for the people,” she said. “Being able to talk with him and see and hear the people on the kinds of issues they were facing really created a long-lasting impact on me… and what we need to do to move those communities forward and be a beacon and be a voice in Albany for those people.”

Hinchey said she will work to bring upstate New Yorkers together across the 140 miles of the 46th District in the Hudson and Mohawk valleys.

“It’s going to take us to lead our communities back to love,” she said. “That’s what this election means for all of us: Despite the 140 miles, love and sincerity prevail. I look forward to fight along side you as we fight for a future we can all be proud of.”

As an Amazon Associate I earn from qualifying purchases.