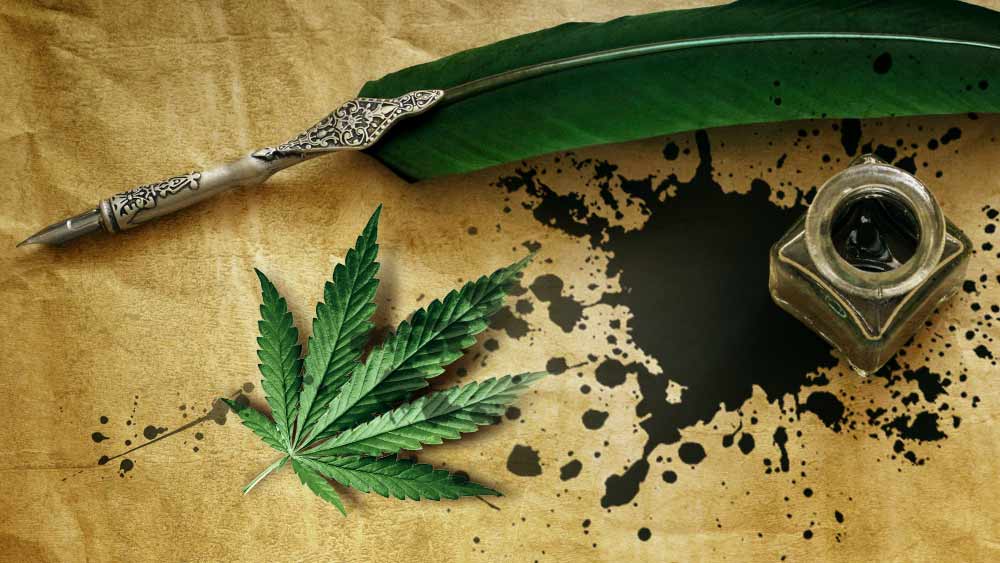 There’s a string of thought spanning the Western literary canon that values what they call “a noted weed” for its potential to fuel creativity.

It isn’t recorded which poet was the first to discover cannabis as a means to expand perception or evade the laws of reality. Such usage was probably a part of much older religious practices that saw the plant as a doorway to elevated spiritual experiences.

But it was only a matter of time before poets embraced the high.

Such a moment had to arrive much later in literary history: ancient Greeks and Romans were far too “golden middle” to embrace the extreme psychedelic experiences, while anonymous medieval artists acknowledged only divine inspiration as a spiritual enhancer.

Everything changed, however, with the dawn of modernity.

The early modern age, when the whole world was proclaiming rebirth, brought a fresh perception of art, spirituality, and how mankind defined itself in general.

In a word, human self-consciousness began to change.

The connection with God was not cut altogether, as it’s usually assumed. People and artists still constructed their identities in relation to the divine.

However, the renewed classical studies introduced European authors to Greek and Arab literature, which woke them up to the fact that cannabis had other uses in Africa and Asia, besides rope and fabric production.

At first, it seems as if the sense of fear overwhelmed renaissance writers: Boccaccio mentions the “powder or drugge” obtained from the Prince of the East, who used it to send his “Novices” “into Purgatory when he pleased” (Third Day, Eighth Story, The Decameron), while Dante refers to “the treacherous assassin” in the XIX song of Inferno.

Both writers are probably alluding to the famous Islamic Order of Assassins who lived in Syria and in the mountains of Persia from XI to XIII century. Marco Polo brought the story about them to Europe, describing them as the sect which used hashish to obtain an army of “fideles”.

According to the tale, the founder of the Assassins, Hassan-i Sabbah, used hashish to train the Novices by infusing their spiritual journey to “paradise” with it, and then claiming he had the power to bring them down to earth.

Even though historians dispute this legend, it survived in the form of a folklore story about dangerous killers who use cannabis to provoke murderous impulses, and it made its way into renaissance books.

It was the vital ingredient of witches’ pot, alongside mandrake, datura, monkshood, belladonna, henbane, and hemlock (in reality, those pots were probably medical ointments, as a lot of the poor and unprotected couldn’t afford a physician).

But somewhere in Bard’s sonnets, the unconventionalists argue, we can hear a different story of cannabis:

Why with the time do I not glance aside

To new-found methods and to compounds strange?

Why write I still all one, ever the same,

And keep invention in a noted weed,

That every word doth almost tell my name,

Showing their birth and where they did proceed?

Of course, it can be a matter of interpretation – “compounds strange” and “noted weed” might be symbolic expressions of other meanings (The Norton Shakespeare annotates the verse thus: “And keep literary creativity in such familiar clothing.”)

Either way, it was a big thing for our time when a 2001 study conducted a forensic analysis of pipe bowls and pipe stems from XVII century England, including samples from Stratford-upon-Avon (Shakespeare’s birthplace).

The chemical examination of the samples “firmly identified” nicotine, myristic acid (known to be hallucinogenic), borneol, and other forms of camphor. The scientists also found vanillin, quinoline, and cocaine introduced to Europe from South America. Residues of cannabis were “suggested but not proven.”

The team of scientists hasted to note that “it is not assumed that any of the pipes were necessarily used by Shakespeare [Shakespeare’s birthplace became an inn in the early 17th century], but the results support the view that at least one hallucinogen was accessible to him and other writers in the 17th century.”

In 1978, Napoleon brought his troops and academics to Egypt to destroy the English trade interests in the Middle East, but the campaign ended in defeat for the French, and the troops remained in Egypt till 1801.

Since there was no alcohol available in Egypt, the French army indulged in consuming a strong drink made of hashish, and smoked hemp leaves.

Napoleon’s explicit ban of such practice was largely ignored, and Europeans eventually brought hashish back to the homeland.

Soon, the entire France was fascinated by it. A somewhat curious string of events led to the full embrace of hashish by literary circles in Paris.

A young psychologist, Jacques-Joseph Moreau (later to be proclaimed as one of the founding fathers of modern psychopharmacology), explored Algerian dawamesc [hashish edible paste] as a potential treatment for mental illnesses. He invited Théophile Gautier to try it, and glorious visions soon overpowered the poet.

The rest is pure literary history.

Students who paraded the streets of Paris during the 1848 revolution read Dumas’ The Count of Monte Cristo (which explored the aphrodisiac properties of hashish), Baudelaire’s Les Paradis Artificiels (Artificial Paradises), and Lallemand’s prophetic book “Le Hachych”.

Gautier eventually left the Club in order to artistically pursue his own “natural dreams”, while Baudelaire famously didn’t succeed in finding the ideal in his opium and hashish-infused visions.

But the words written are still here to testify of their steaming spirits and encounters with arcadian reality.

Up north in England, hashish also made its way to writers, but it seems that it was somewhat overshadowed by opium.

In his “Confessions of an English Opium-Eater” (1821), Tomas de Quincey claimed to have ‘taken happiness, both in solid and liquid shape’, while Oscar Wilde perfectly depicted fin de siecle escapist atmosphere in his hero’s attempts to “buy oblivion” with opium use.

Somewhere around the mid-19th century, America’s curiosity was tackled by the hashish-infused visions of Bayard Taylor, who described them as a part of his impressions from Damask.

Soon a young author Fitz Hugh Ludlow started competing with De Quincey in describing all the horrors and pleasures that came as a consequence of ingesting Tilden’s Extract of cannabis, sold in every grocery store for 6 cents.

The result was the very first American classical piece on drugs – The Hasheesh Eater (1857), which the public all over the country received with great curiosity.

It was not long before “hashish houses” rose all across America, regularly visited by “habitués” who, in an oriental setting, ate majoun (a form of cannabis edible), smoked ganja, and drank coca tea.

A short text by H. H. Kane perfectly depicts this decadent atmosphere at the end of the century:

“Wonder, amazement, admiration, but faintly portray my mental condition. Prepared by what I had already seen and experienced for something odd and Oriental, still the magnificence of what now met my gaze far surpassed anything I had ever dreamed of, and brought to my mind the scenes of the Arabian Nights, forgotten since boyhood until now. My every sense was irresistibly taken captive, and it was some moments before I could realize that I really was not the victim of some dream, for I seemed to have wholly severed my connection with the world of today, and to have stepped back several centuries into the times of genii, fairies, and fountains — into the very heart of Persia or Arabia.”

(A hashish-house in New York: the curious adventures of an individual who indulged in a few pipefuls of the narcotic hemp)

In short, it was a true preparation for what was to come in the 20th century.

The Dark Side of History

It’s safe to say cannabis made its way to Western literary history just when modernity dawned. It also gloriously marched through the 19th-century literature, behind the lights of revolutions.

But writers had a “love and hate” relationship with it. It was both an inspirational train leading to paradise and a nightmare lurking in the inner self’s depths.

Baudelaire’s The Poem of Hashish is one of the sharpest examples. While exploring intoxication, the poet describes the feeling as “heaven in a teaspoon” but also doubts that it “is a Paradise which must be bought at the price of eternal salvation.”

When asked whether hashish holds great spiritual benefits and if it can be a fertile instrument for thinking, he replied: “Hashish reveals to the individual nothing but himself […] Let us admit for the moment that hashish gives, or at least increases, genius; they forget that it is in the nature of hashish to diminish the will, and that thus it gives with one hand what it withdraws with the other; that is to say, imagination without the faculty of profiting by it.”